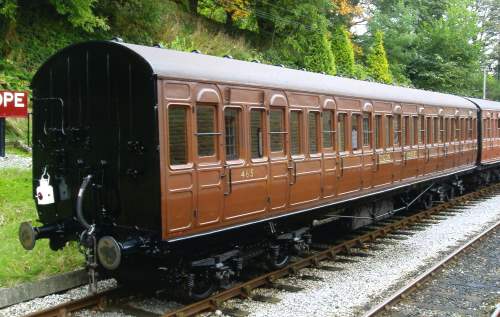 CURRENT STATUS:   On display in the museum at Ingrow.

Nearly one hundred "Dreadnoughts" were built between 1910 and 1923. Special features which can be found on them are the unusually wide footboards and the curved tops to the doors, reducing the risk of damage if accidentally opened in tunnels.

465 was built by the Metropolitan Carriage, Wagon & Finance Company of Birmingham.

This type of carriage survived until electrification reached Amersham in September 1961, allowing replacement of this locomotive-hauled stock by electric multiple-unit trains.   London Transport then stored  six carriages at Upminster, Essex until needed in May 1963 for the Underground Centenary celebrations.

The three Metropolitan Railway carriages owned by the Trust were all initially purchased privately by Mr David Kitton from London Transport for the then-proposed Westerham Valley Railway preservation project. When this scheme failed, the carriages were loaned to the Worth Valley Railway in July 1965 and two of them – nos. 427 and 465 - formed part of this railway's Re-opening train in 1968. After extensive use in the earlier years of the railway the Vintage Carriages Trust purchased all three carriages from Mr Kitton in 1974.

These carriages are occasionally used on the Keighley and Worth Valley Railway as a Vintage Train set.

The Trust has also embarked on a programme of cleaning, checking and making good where necessary the bogies and underframes of all three of the Metropolitan carriages.   The bogie and underframe overhaul of this carriage was completed in June 2004

Although these are the only extant "Dreadnought" carriages, other Metropolitan Railway vehicles have survived. Some of these can be found on the Bluebell Railway.

This Week; Peaky Blinders; South Riding (BBCTV); Brideshead Revisited (2007 version); The History of the London Underground (archive footage); Commercial for pensions; The Grand; The Unknown Soldier; Fairy Tale - a True Story; Holiday; Jude; The Secret Agent (1992 BBCTV version); Portrait of a Marriage; Sherlock Holmes - the Bruce Partington Plans; Sherlock Holmes - Wisteria Lodge; Without A Clue; Return of the Antelope; A Woman of Substance; My Brother Jonathan; How We Used To Live; Sorrell and Son; BBCTV documentary about 1929 Rugby League Cup Final at Wembley; Yanks; The Seven Per Cent Solution.